Weaknesses to work on 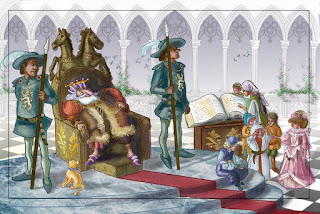 In terms of personal difficulties, know I have many things I need to work through.  I have to strengthen my knowledge and skill drawing hands and intend to spend a good deal of time on that next year.  I have a problem giving up outlines in my illustrations.  I have clung to them because they are familiar in children’s illustration but I am somewhat afraid of what it will mean if I eliminate them. Yet they are becoming a crutch and are limiting.   Some of my work is beginning to look like a coloring book with the coloring already done.  I don’t want that look.  I want the outlines to look like they are part of the illustration and work to unite the image overall. 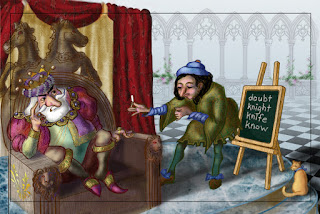 I tend to rely on just one or two brushes in Photoshop and have been told that a variety of brushes and textures would help my work but when I use a variety of brushes I’m not as happy with the outcome.  I need to experiment more and that takes time.  I figure I will eventually find the textures and brushes that work best for me but until then I am using an abundance of experimentation.

These are things I know I will be working on in the coming year.
Posted by Denise McGill at 6:35 PM No comments:

Why look at other artist's art?

I think that looking at the artwork of other professionals in the business does sway my work slightly for several reasons.

One is that I keep up with what is actually popular in my field right now.  Not that I want to cater only to what sells, but I do want to know what children are seeing, what parents are currently buying for their children and what direction the medium is taking.  It makes a difference in the way I approach publishers and the way I execute my own illustrations.

Second is that I want to be challenged by what the professionals are doing.  Looking at the work of artists I admire keeps me striving to get better at my own craft.  It causes me to not be satisfied with what I’m doing now.  I like to think that I have to be better tomorrow than I am today and to do that, I have to keep reaching for a higher goal.  I have to keep studying, watching tutorials, and looking for new ways to approach my work.

Third is just the enjoyment of others work: the colors other artists are choosing as opposed to mine; the lines they use or don’t use; the perspective and the point of view they use.  I never look at another artist’s work without thinking somewhere in the back of my mind, “how can I do that with my work?”  It’s just fun to look at what is out there as opposed to my style and my work.  I enjoy it.

Posted by Denise McGill at 10:10 AM No comments: 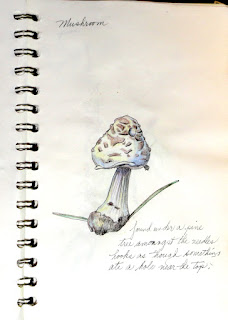 I believe keeping a sketchbook with me at all times is of great value.  I keep one in my car, one at my desk, and one near my bed so that at any time of the day when inspiration strikes I am near a source to record it.  They say Thomas Edison thought up some of his best ideas in that uninhibited state right between sleep and waking.  He would nap holding a large metal ball so that just as he fell into sleep, he would drop the ball, wake and immediately record the ideas he had been subliminally thinking before he fell asleep.  Some of my best ideas come to me in images right before I’m sleeping. 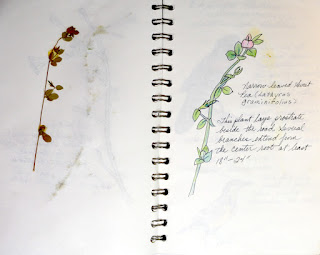 As a first born, I am a consummate list maker.  I have made lists for everything, from groceries to 10-year future goals.  Keeping an art journal is sort of a marriage between the lists and sketchbook.  It only makes sense to record the journey of my projects and beyond.  I feel sure that it would hold great value as a source of inspiration and motivation for the future, if not memorabilia.  I often go back through my lists and prayer journals to find things 5 to 10 years ago that I thought were catastrophic events, which now only seem minor annoyances.  Looking back, it seems, also adds perspective. 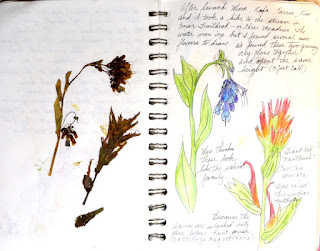 Years ago (22 years I think) when my father died, he requested to have his ashes scattered in the mountains that he loved, and often hunted in.  He died in December and when we took his ashes up there in July there was still snow on the ground.  I took my sketchbook with me and recorded weeds and flowers I found there, drawing them on one side of my journal and gluing the actual plant onto the other side.  It was a whim that made me do it but even now that sketchbook with its brittle specimens is of great value to me.  I often look back on it and remember the beautiful place he is now.  I have also used the drawings of the plants and flowers in paintings from time to time, so it has double use. 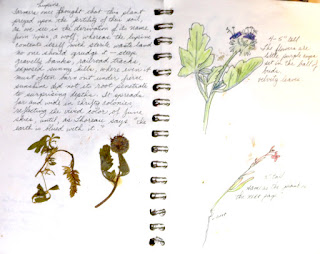 Keep a sketch journal as an artistic exercise and sketch often.  It is a very valuable exercise and habit to get into.
Posted by Denise McGill at 8:39 AM No comments: